All SCI Show Boards are custom-created using your vehicle photos and information!
Signs are printed on the material you choose, either PVC or high-gloss aluminum: • SCI cut-to-shape boards are printed directly onto a PVC substrate with outdoor-rated, UV-cured inks. They’re water-and-fade resistant and will not delaminate

• Every show board is custom cut to-shape and backed by an extremely sturdy plastic corrugate easel. Designed to be weighted against blow-overs, our easel will also fold flat (to less than 1” in depth) for easy storage in back seats and trunks 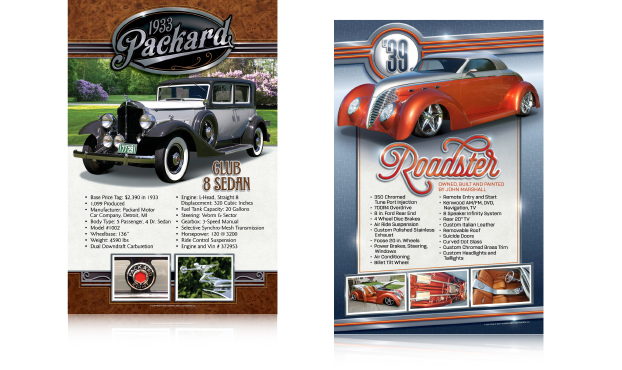 • Our super high-gloss aluminum edition is perfect for both indoor and outdoor exhibiting. Signs are water-and-fade resistant, and will not delaminate

Visit the Show Cars Shop to view graphic themes, find tips on how to take great car photos, and link to online vehicle spec resources (very handy if you don’t have your car’s original sticker information.)

Just click on your preferred graphic theme, select your size and follow the prompts to upload your vehicle information through our secure payment portal. Once submitted, our designers will take it from there!

Look for
your proof!

Yes, you’ll definitely receive a proof via email before production! This is your chance to email us back with any text or color corrections, and we’ll make sure your sign is ready for show time. It’s that simple!

The quality of your main photo is crucial to creating a great Show Board! Here’s how to take a can’t-miss car photo:

SHOOT IN THE RIGHT LIGHT.

1-2 hours after sunrise or 1-2 hours before sunset on a clear, sunny day, park with the driver’s or passenger’s headlight pointed toward the sun to get direct light on the car’s front and side. Shoot with the sun to your back, but position yourself to minimize casting a shadow on your car.

WATCH OUT FOR REFLECTIONS.

Beautiful, shiny paint reflects just like a mirror, and object reflections are the spoiler of body design! Find an open space in a large parking lot, avoiding trees, buildings, poles (and clouds) that will reflect onto your vehicle. Avoid parking on grass to minimize green casting on paint.

Regardless of the kind of camera you have, fill the frame as completely as possible. If using a smartphone camera, TAKE THE PHOTO HORIZONTALLY, NOT VERTICALLY. This will fully utilize the resolution of your camera and capture as much detail as possible at the largest size.

Get Inspired - Visit The SCI Gallery!

Huge thanks to the SCI customers who have allowed us to share their vehicle show boards with the world! We hope you enjoy this cruise through automotive history as much as we do.

CRUISE OUR SHOW BOARD GALLERY

BECAUSE EVERY CAR HAS A STORY.

Aside from the roaring engines and glittering paint, American auto shows are as much about stories as anything else. Enthusiasts come to car shows to hear, tell and relive those stories because of the passion and respect they hold for that great human endeavor: the Automobile. On any auto show thoroughfare you’ll see and hear a colorful retelling of vehicle design and manufacturing; walk beside gleaming artifacts built with pride by the hardworking hands of people who came before us, and sometimes the people standing right next to us.

In the beginning function followed form; when the first horse-drawn carriage was outfitted with an engine, the whole idea was just getting it to “go.” And when it went, so did the days of human reliance on cumbersome, mass-transit methods of travel. Vehicle power was now self-contained, and in the years that followed we saw automobile forms that were built around function. But as soon as we could “go,” we wanted to “go faster.”

Manufacturing processes were pushed to new levels of innovation as automotive aesthetics favored sleek, aerodynamic lines that told the story of speed. Production methods improved and with it affordability; paint colors and options flourished to fit the needs of every consumer because in the mid-20th century, part of the automotive dream meant “getting there in style.” Compare nearly a decade of early 20th century, black-only Model T “Tin Lizzies” to the “Tropican Green” Ford Deluxe of 1939. Or the “Bahama Blue of a 1949 Buick Century. Or a 1959 Cadillac Eldorado in “Dusk Pink.”

As more roads and highways were built to connect a country hungry to travel, the whole of America saw a rapid increase of long-distance vacationers in kid-filled family cars. Improvements in automotive design got them there safely, while the addition of interior creature comforts got them there comfortably. Dinah Shore sang “See the USA in Your Chevrolet” and we did. But we also saw it in our Packards and Edsels, Roadmasters, Thunderbirds, GTO’s and Toronados. And America welcomed them all.

SO, WHAT’S THE STORY? Maybe your show car came off the assembly line to your grandfather, and enjoyed a well-maintained life as a four-wheeled family member making countless driving vacations, going on first dates, bringing soldiers home from wars and babies home from hospitals. Now there are some stories.

Or maybe less lovingly cared for, your car was unearthed in your grandfather’s old barn, reduced to nothing more than a rusted body inhabited by chickens. But you heard her glory days still humming in that quiet frame, so with a lot of blood, sweat and dollars she’s here today, glistening in the sunshine and drawing smiles from strangers. Now that’s a story, too.

If you haven’t picked up on it by now, we’ll just say it in three words: we love cars. Sedans and sport coupes, classics and customs, roadsters and rat rods. And we’re not the only ones. When you bring your vehicle to an auto show, people want to know the story. Even if it’s just what’s under the hood, or maybe how much it cost when it was first built. Maybe the restoration details. It’s just important to tell ‘em what you’ve got, because yes, people really do want to know.

And that’s why Show Cars Illustrated was founded- on the principle that show boards should be crafted to present your photos and vehicle information in a way that’s not just eye-catching (and they are), but practical in every auto show environment. Because we know how much you love that little gem out in the garage, we thought it was just the kind of thing you’d appreciate. So let’s go… it’s time to tell her story. Click to see our Gallery Page.